It’s time we make some crafts for our Halloweeny friends, and what is more spooky than ghosts? Learn how to make an easy origami ghost with our step-by-step instructions and video tutorial. 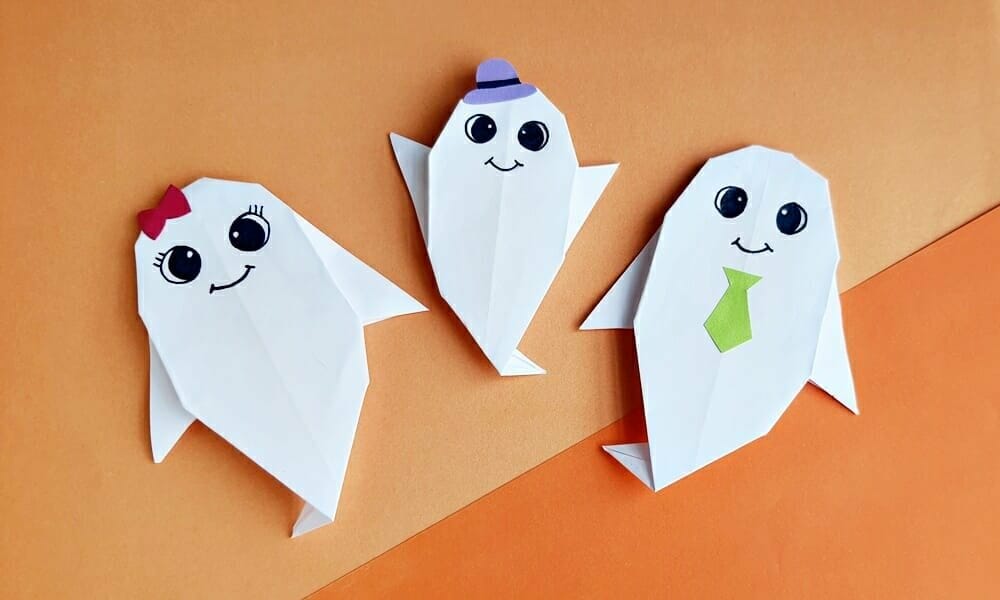 Table of Contents show
How to make an Origami Ghost
List of Supplies
Tools
Materials
Step by Step Folding Instructions
Step 1: Base Creases
Step 2: Base Creases
Step 3: Base Folding
Step 4: Folding the Arms
Step 5: Shaping the Sides
Step 6: Shaping the Head and Tail
Video Tutorial: How to Make Origami Ghost Craft for Halloween
Tips for Beginners on Making this Origami Halloween Ghost

Remember Casper, the friendly ghost we all loved in our childhood? I certainly do, and whenever I try to imagine a spirit, I imagine Casper. Today, I was thinking of making an origami ghost for Halloween. Guess what? I ended up making Casper.

Then I thought, why not make an entire origami ghost family, the family our lonely Casper never had. It felt good to give Casper a family, even though it was just origami. I hope you’ll feel the same affinity I felt after making this paper ghost family craft.

We know many of our Halloween friends are occasional crafters. So, we made the ghost craft easy for them. This origami project is super beginner-friendly and a great activity to engage kids as well.

Of course, these origami ghosts would go perfectly as Halloweendecors and props. But do we really need an occasion to craft ourselves some friendly ghosts? This origami is also great for practicing paper folding if you’re a beginner at origami folding. 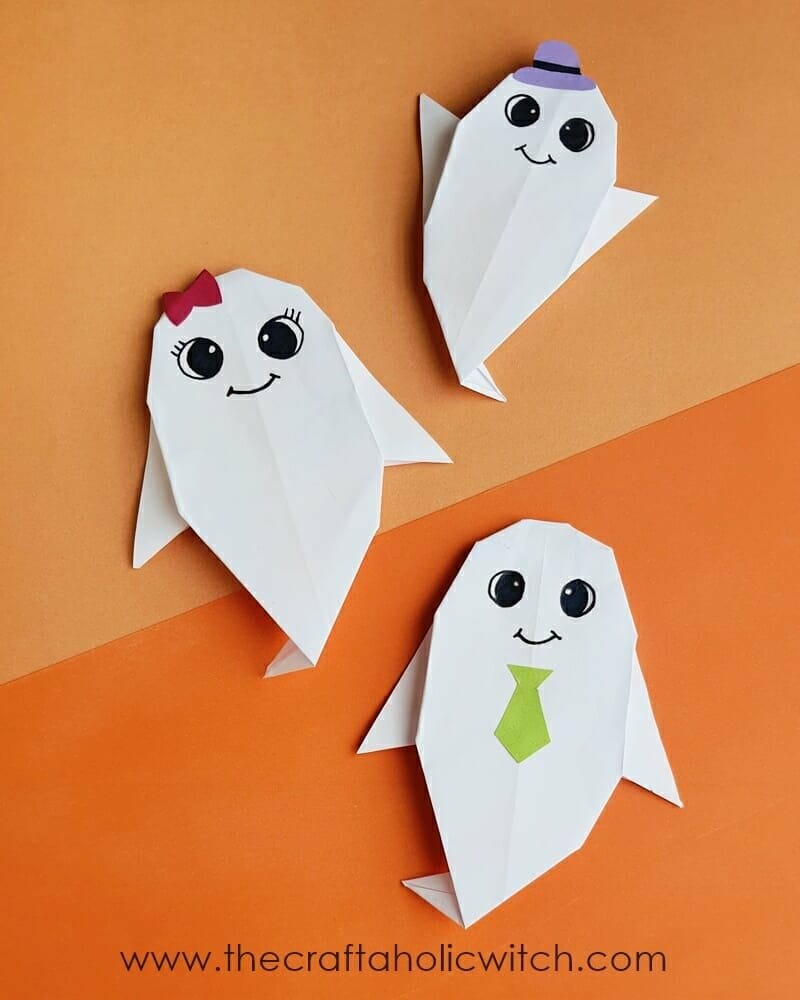 How to make an Origami Ghost

The craft costs less than a dollar. You can make a bunch of origami ghosts using a few white papers and it won’t even cost a dollar.

Prepare a piece of square paper. Fold the paper in half, diagonally, and then unfold it.

Fold any one side of the square paper along the diagonal crease. 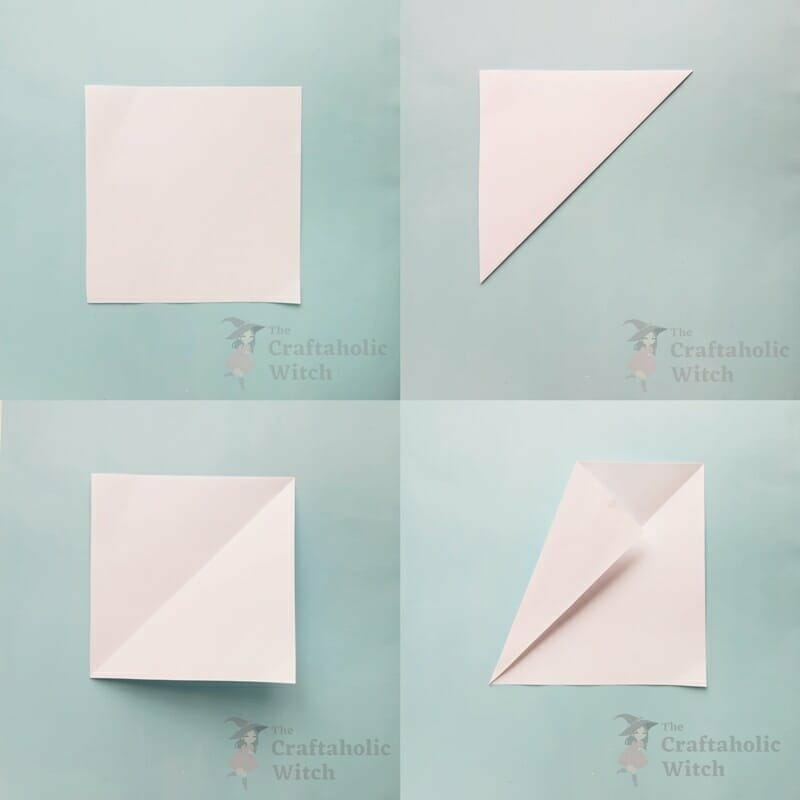 Similarly, fold and unfold the opposite adjacent sides along the same diagonal crease. 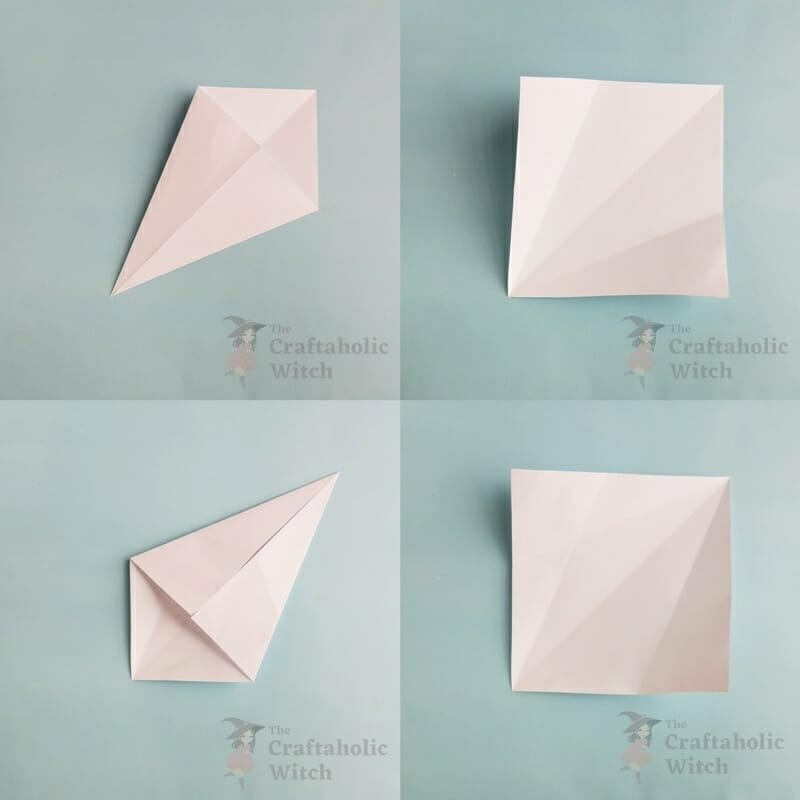 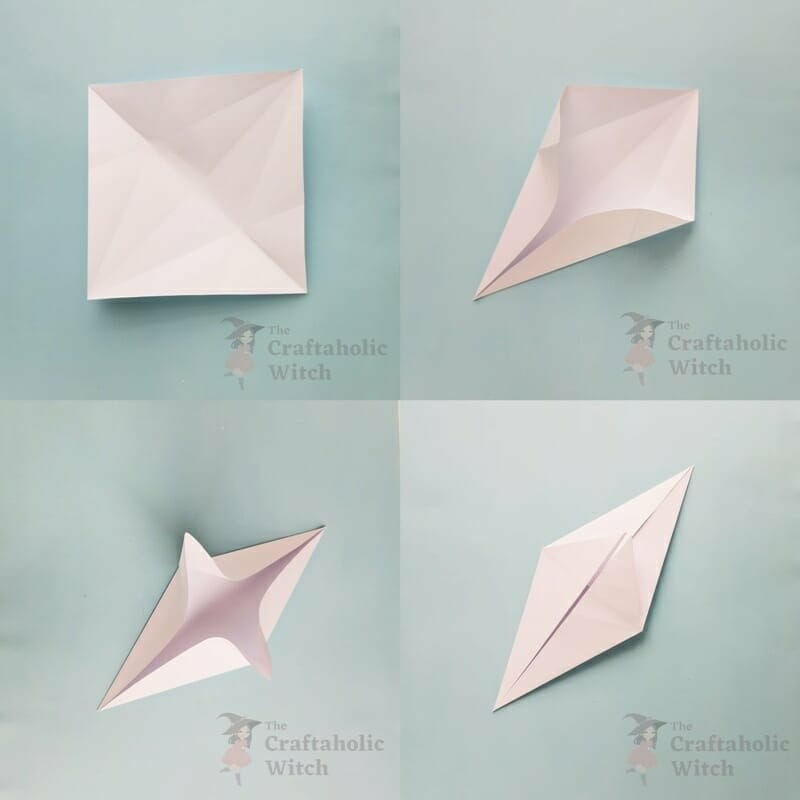 We will turn the triangle flaps into the arms of the paper ghost. Let’s work on the bottom part of the current paper. Align the open side of the right side (long side) with the open side. Neatly shape the arm by aligning the open (short) side of the flap along the top. Flatten the arm pattern.

Similarly, shape the other arm (left side) pattern. Turn the current paper pattern to the other side. 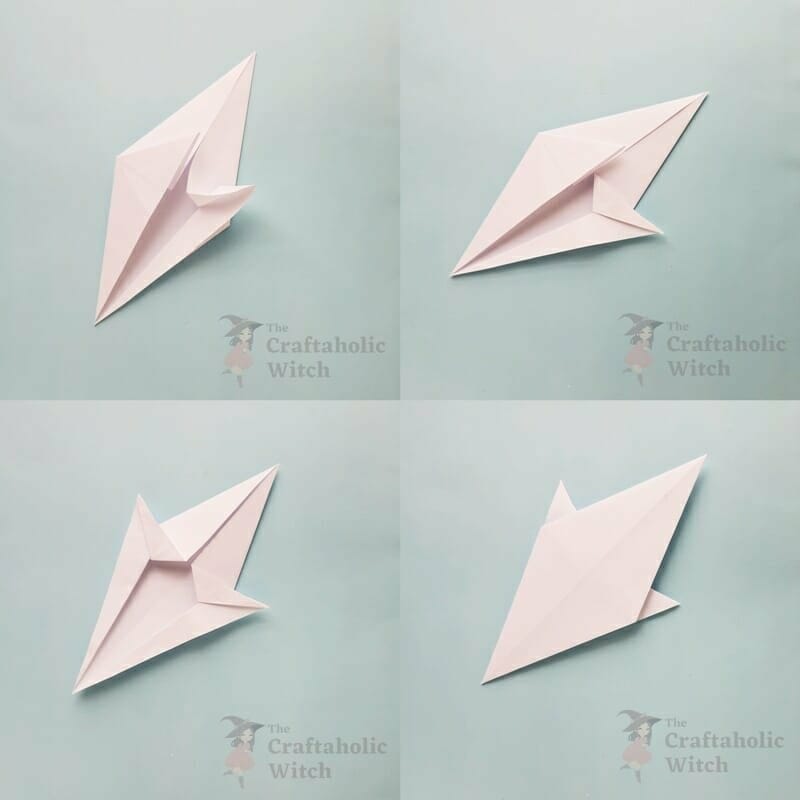 Fold the right side along the points of the arm’s top and bottom parts. Unfold and fold the creases part inside. 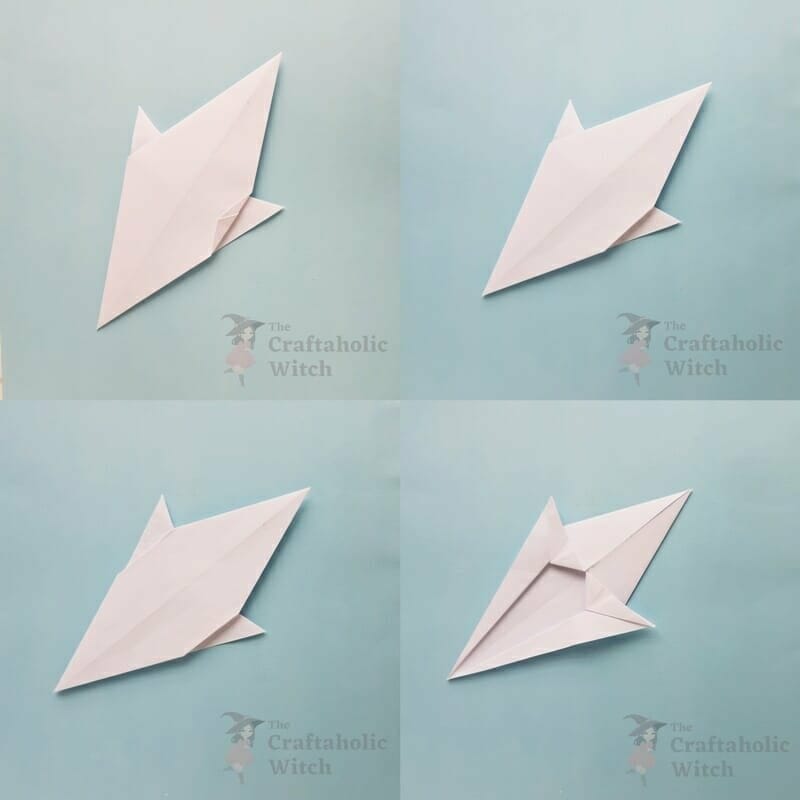 Step 6: Shaping the Head and Tail

Fold the 2 sides of the top fold slightly inwards. Fold the bottom part (tail) towards any direction (left or right), diagonally.

Turn the pattern to the other side (the front side). Use a gel pen or sharpie to draw the face of the ghost. You can use colored craft papers to cut out small props to add to the ghost, like we did. 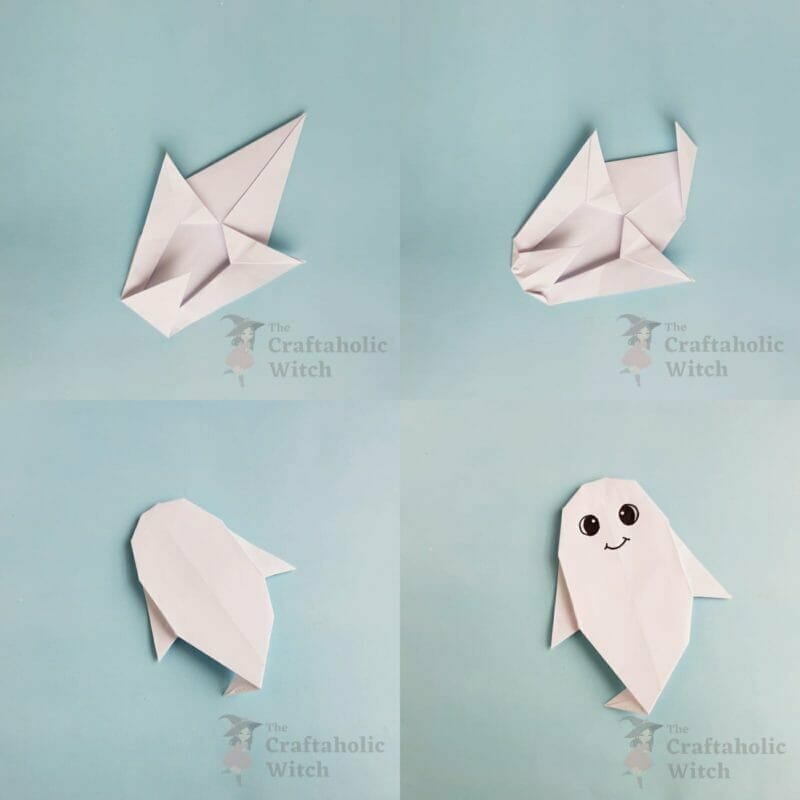 Video Tutorial: How to Make Origami Ghost Craft for Halloween

It’s often hard to follow written tutorials when it comes to origami craft making. So, we made an easy-to-follow video on making ghost origami. I hope you’ll like the video, and if you do, don’t forget to subscribe to our channel.

Tips for Beginners on Making this Origami Halloween Ghost

Here are some tips if you’re having difficulty crafting the origami ghost. 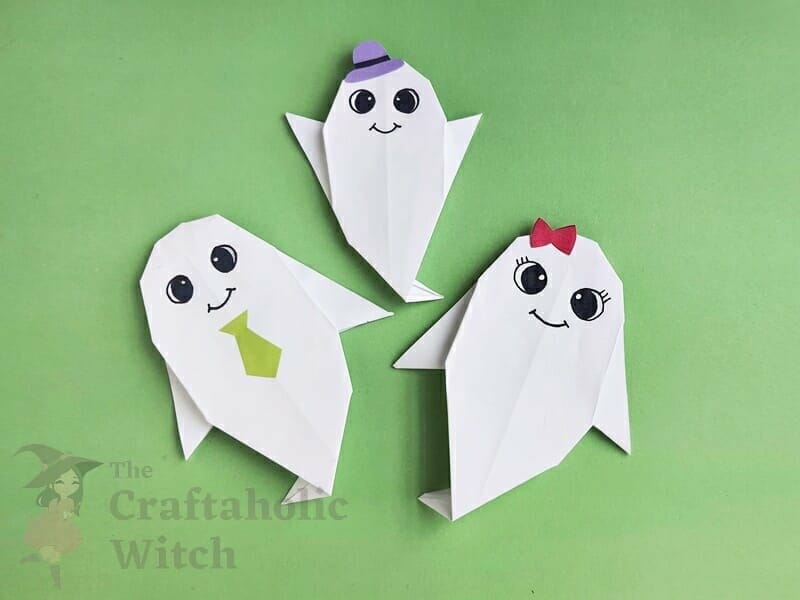 This origami ghost pattern is very easy and quick to craft. If you’re looking forward to learning and practicing beginner origami foldings, then this project is perfect for you! This origami craft can also be used to make garlands or mobile hanging for Halloween decorations. If you do re-create our paper ghosts, please tag us on Facebook or Instagram (use #thecraftaholicwitch). 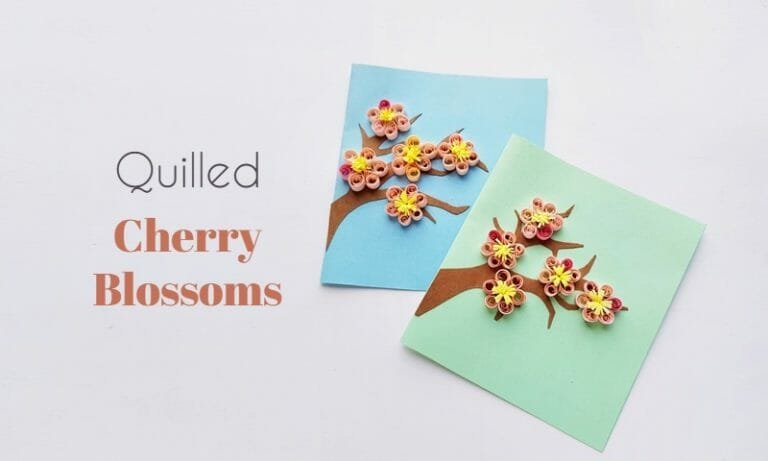 Cherry Blossom Flowers – Paper Quilling Cherry blossoms are one of the most elegant flowers! No matter how you craft them, what material you use, they always look pretty and perfect! I loved how these quilled cherry blossoms turned out and it’s such an easy craft for anyone to try out, even for beginners. These… 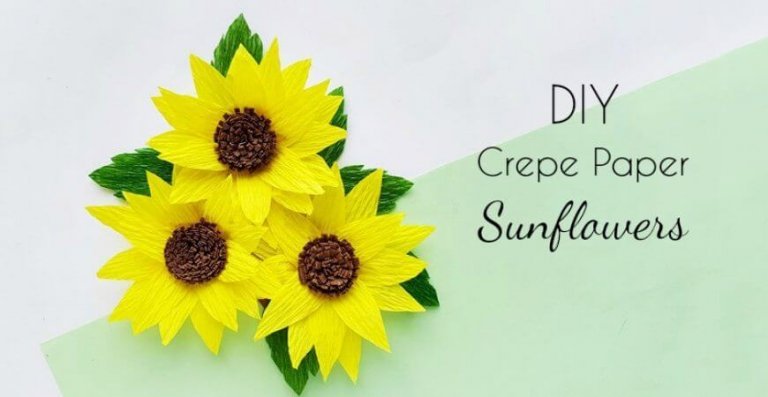 How to Make Crepe Paper Sunflower How are you celebrating this quarantined Summer? I have kept myself busy with Summer flower crafts this season and I will be sharing each of the flower tutorials with you guys. Let’s start our Summer flower craft series with these beautiful crepe paper sunflower craft. You will not believe… 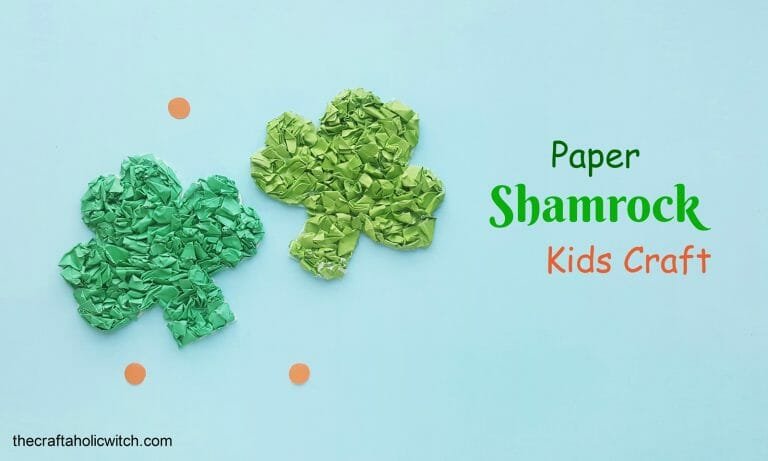 St. Patrick’s Day Kids Craft St. Patrick’s day is coming and we are super excited to share some fun and crafty ideas for the kids! We’ll be sharing some fun St. Patrick’s day crafts throughout this week but for now, let’s start with something simple. If you have some green colored craft papers at home,… 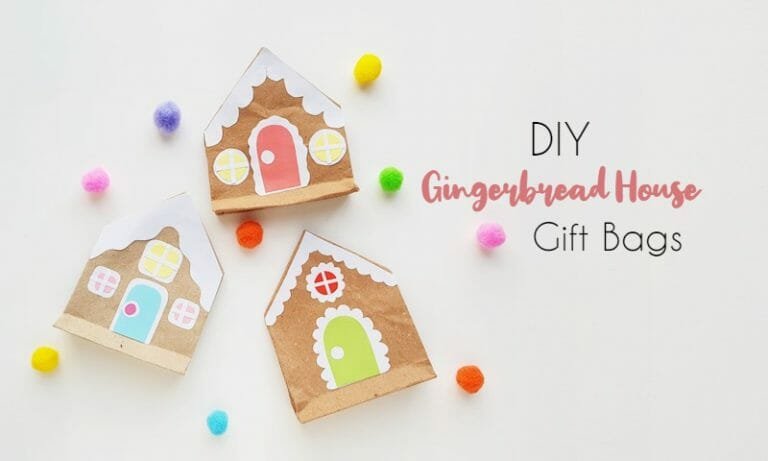 Adorable Gingerbread House Gift Bags! I’ve never had the chance to make a gingerbread house but I absolutely LOVE scrolling through gingerbread house pictures! This time, I couldn’t resist myself, I had to make these gingerbread house gift bags and they turned out so perfect and cute! Whether it’s Christmas or any other occasion, who… 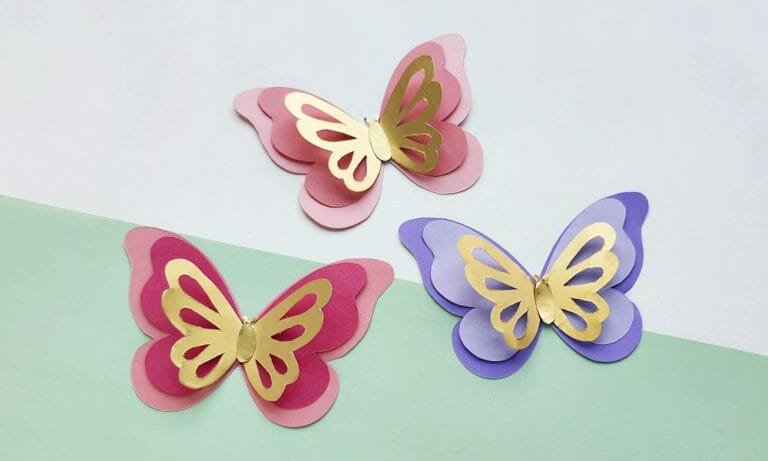 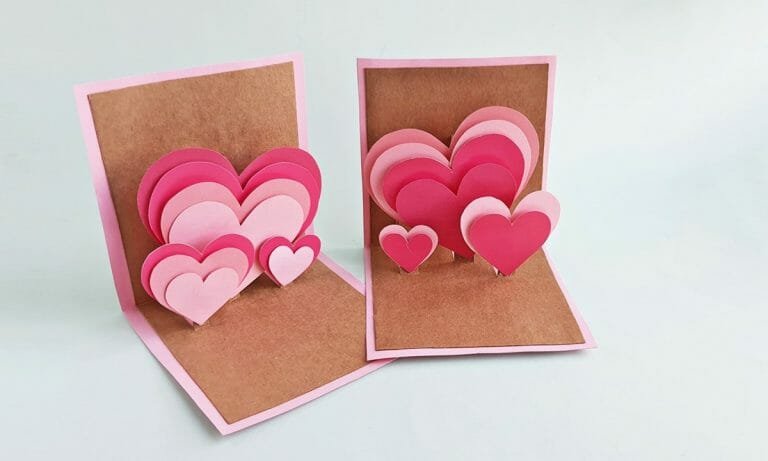 Homemade Valentine’s Day cards are easy to make, but they are considered a special gift since you can put your own personal touch on them. Learn how to Make Easy Heart Pop Up Cards with our step-by-step tutorial and free template. We’re here with our second Valentine’s day craft tutorial, how to make Pop Up…