In this tutorial, we will show 2 ways of making origami frogs. We think the first one is the coolest paper frog on the internet, and the second one is the easiest jumping origami frog. Let’s learn how to make origami frogs with step by step instructions and a video tutorial. 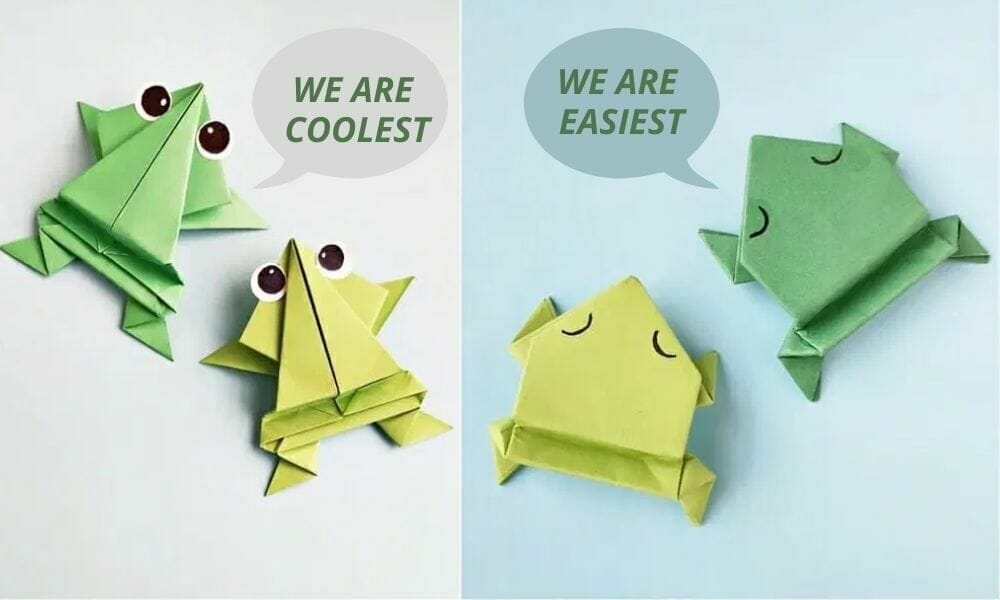 Hello crafty people, we’re back with another origami project but this we’re sharing something fun, kid-friendly, and educational. In today’s tutorial, we’ll show you how to make an origami frog that jumps!

Did you know an interesting fact about a belief about frogs in Japan? It’s quite common in Japan to keep mini frog figures in a purse or bag because they believe that the money kept inside that purse or bag will be spent wisely and will return soon. So, if you want a tiny frog to protect your money, you may learn how to make an origami frog from our tutorial.

This origami frog pattern is an intermediate-level origami project. You can craft one easily with the help of our tutorial, even if you’re a beginner at origami crafts.

What we love the most about these jumping origami frogs is that you can involve kids and teach them a fun and educational craft. Besides, origami is excellent for developing a child’s motor skills and brain development. And they will surely love to play with the paper frogs.

You will need a ruler, pencil, and a pair of scissors to measure and cut the paper required for crafting the jumping origami frog.

The ratio of the paper should be 1:2 and the cost for crafting around 10 frogs would cost less than a dollar.

Tutorial 1: How to Make a Cool Origami Frog That Jumps

Prepare the paper as told in the supplies section.

Fold and align a short side with a long side. We’ve started from the left side of the rectangle paper. This would create a diagonal fold. Unfold before moving to the next step. 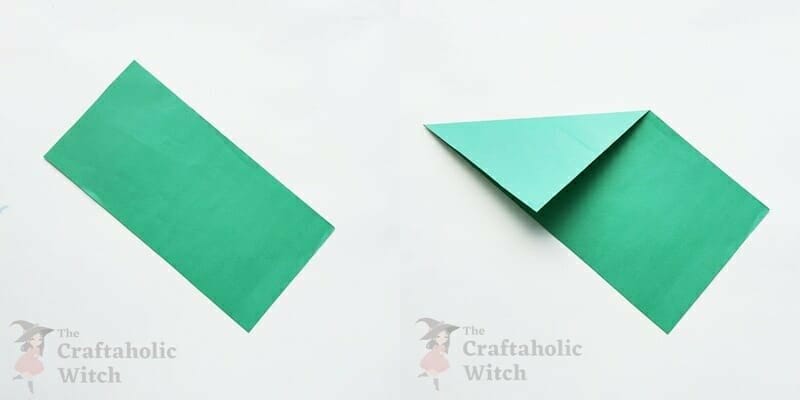 Now, fold the same side by aligning it with the opposite long side. 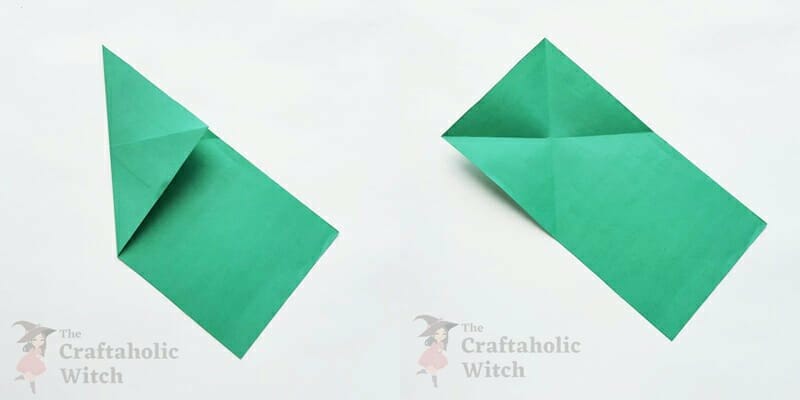 Similarly, fold the right side of the rectangle paper. 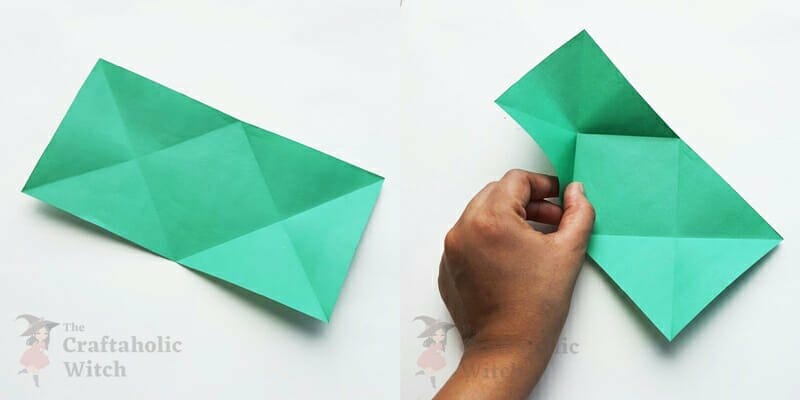 Fold the paper along the crease and flatten it with the paper.

Now, fold the outer crease of the left X crease. 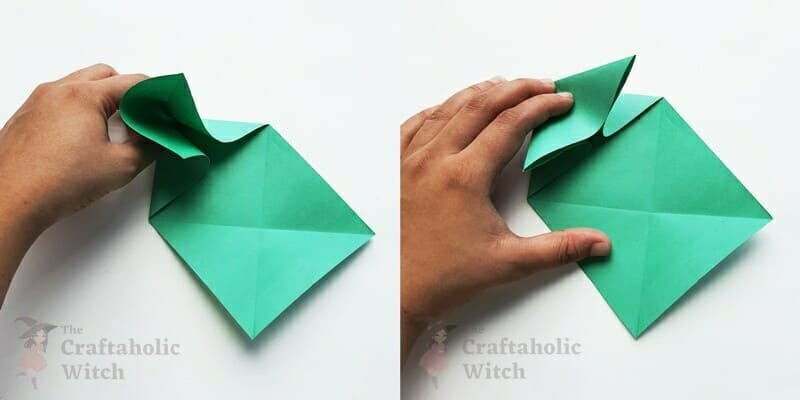 Step 5: Working on the Right Part

Flatten the folded parts of the left side.

Similarly, fold and flatten the right side of the rectangle paper. 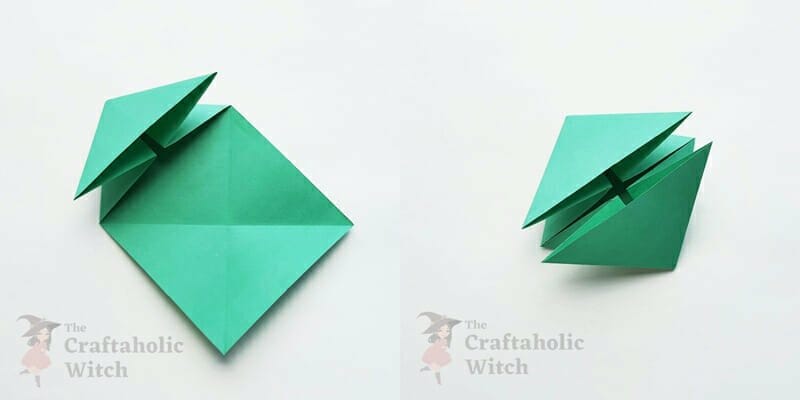 The current pattern should have 4 flaps on 4 sides. Join any one of the open ends of the flaps with the outer corner of the pattern.

Do the same for the adjacent flap of that side. 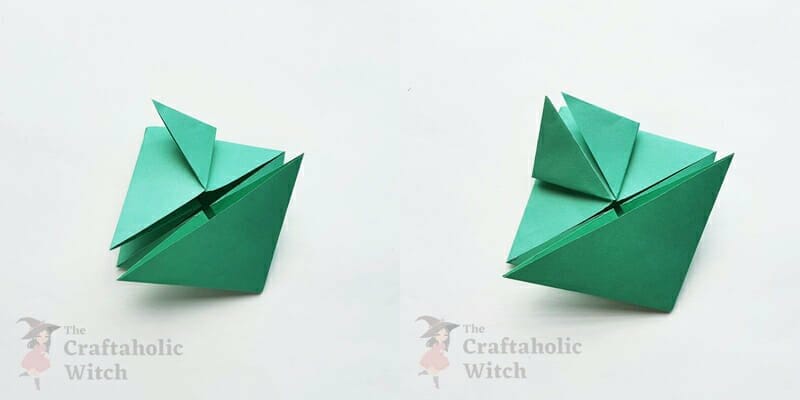 Now, fold the parts into half (the parts we folded in the previous step).

Do the same for the adjacent part. These are the legs (either front or back) of the frog. 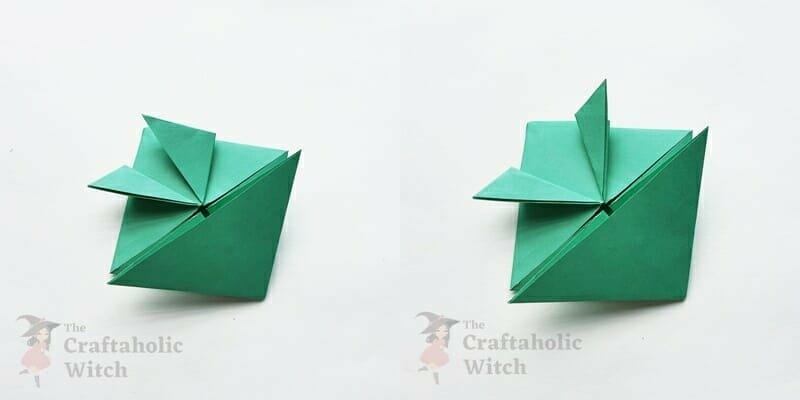 Step 8: Working on the Right Part

Similarly, fold the right side of the pattern

Flip the pattern to the other side. 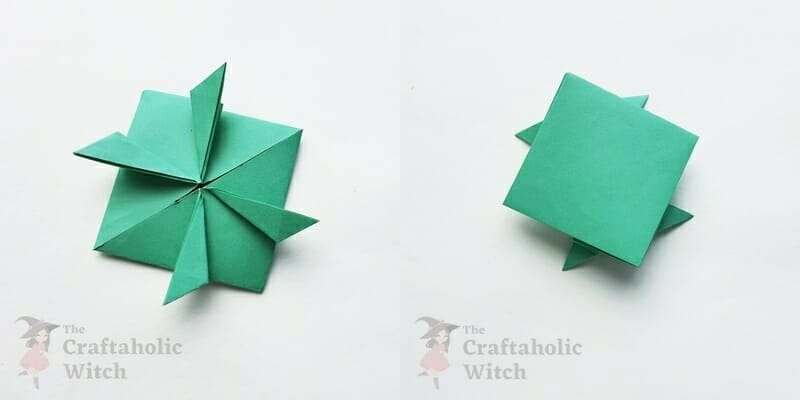 Step 9: Folding the Bottom and Right Side

Fold up either side (adjacent to the legs) of the pattern.

Fold the right side of the pattern by aligning the outer edge with the middle part of the current pattern. 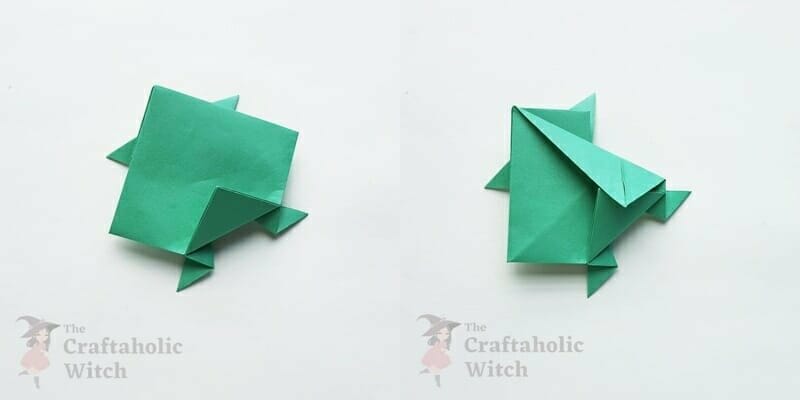 Step 10: Folding the Left Side and Flip Pattern

Now, fold the left side of the current pattern, just like we did for the right side.

Flip the current pattern to either side. 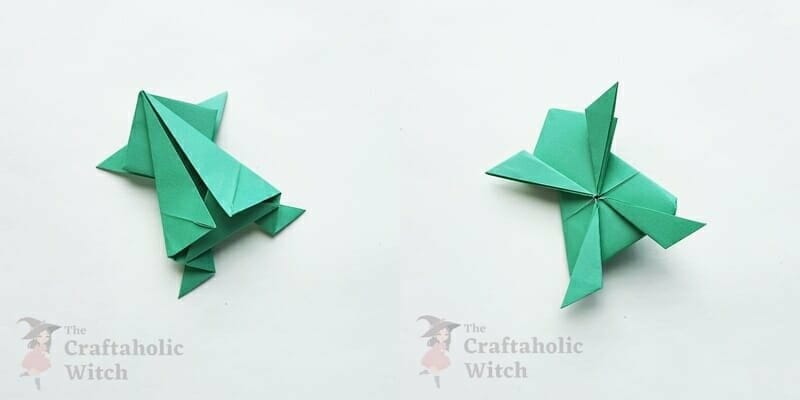 Fold the current pattern in half, by matching the legs together.

Now, fold the straight-edged part down, in half. This part will make the frog jump. 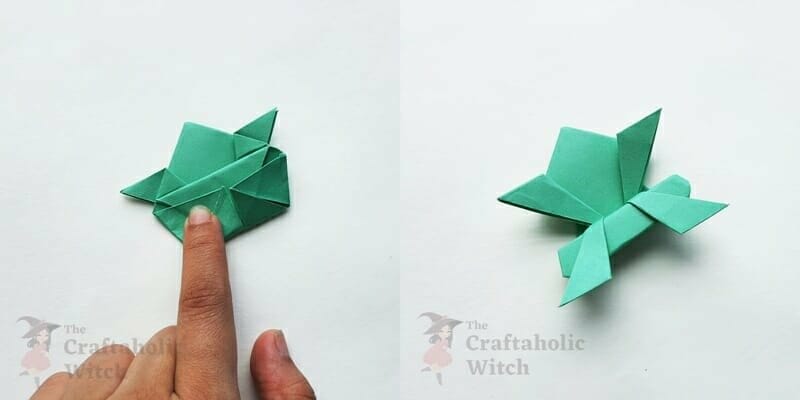 You can create round eyes from paper or use googly eyes. Add the eyes on both sides of the pointy side of the pattern to complete the craft. 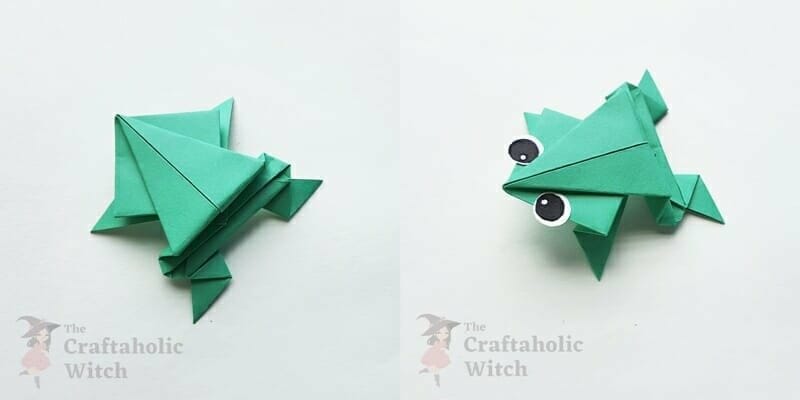 Video Tutorial: How to Make a Jumping Origami Frog

Tutorial 2: How to Make an Easy Origami Frog

Take a piece of square paper and fold it in half.

Alight any one of the short sides with the adjacent long side by creating a diagonal fold. Unfold and do the same with the opposite side. This will form an X crease. 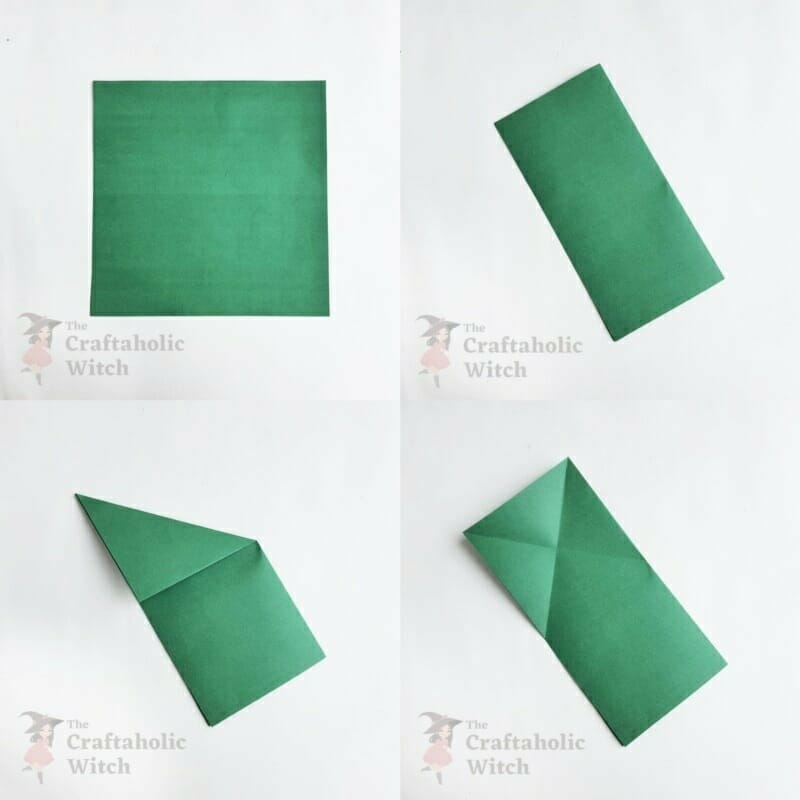 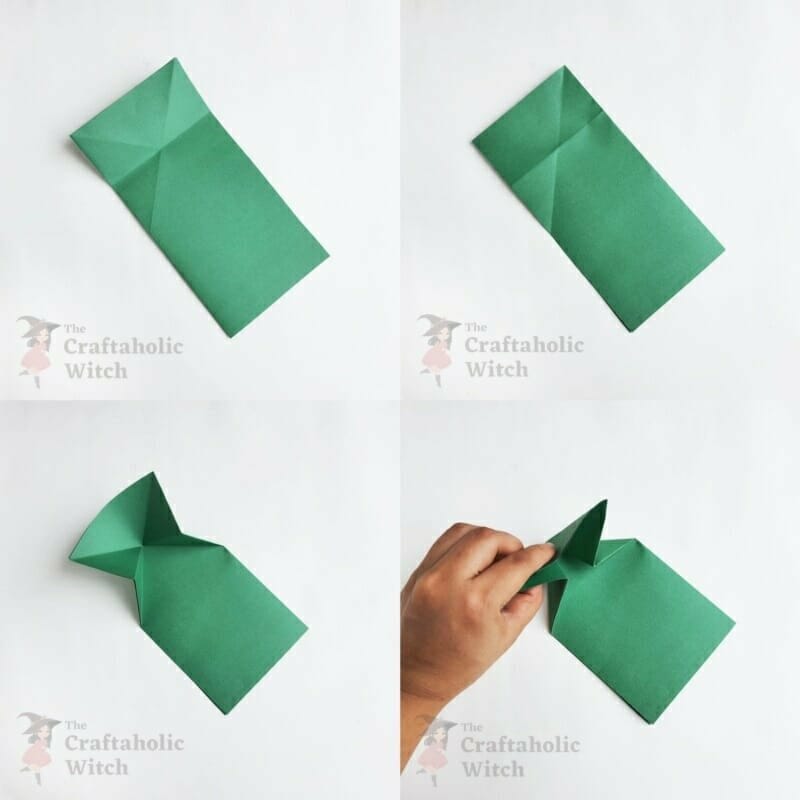 Flatten the triangle side, this will be the front side of the origami frog. Fold up the top layers (flaps on both sides of the triangle part) diagonally. These are the front legs of the paper frog.

Fold the square part of the current pattern in half and align its open side with the bottom side of the triangle part. Now, fold the 2 sides of the half-folded square part. Align the open edges of the sides along the middle. 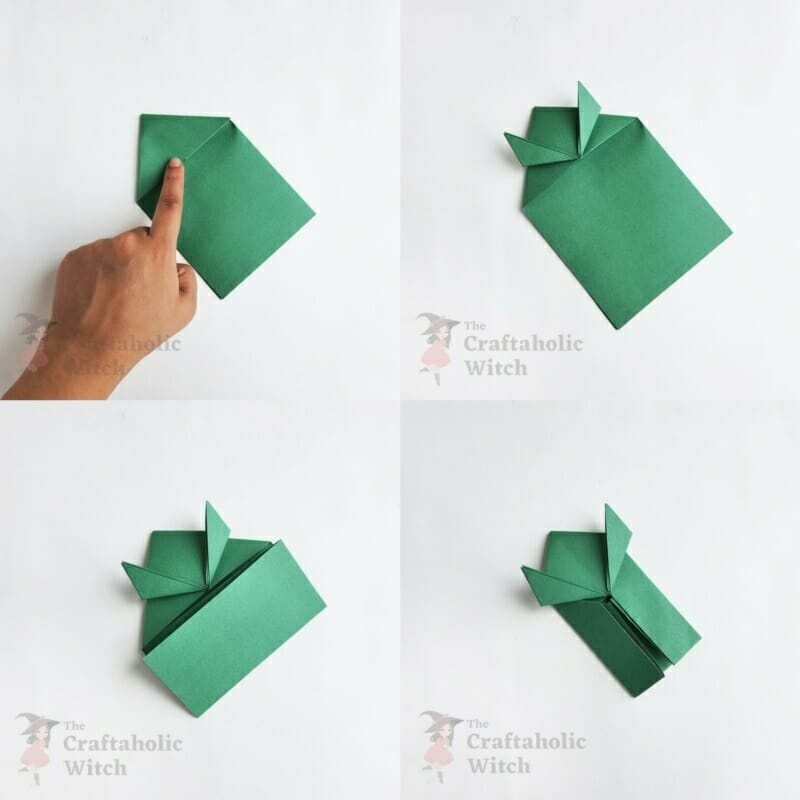 Fold the square part in half again and then unfold it to leave the crease.

Open the bottom layer and draw the 2 corners towards both sides (right and left). Flatten that part with the rest of the pattern. 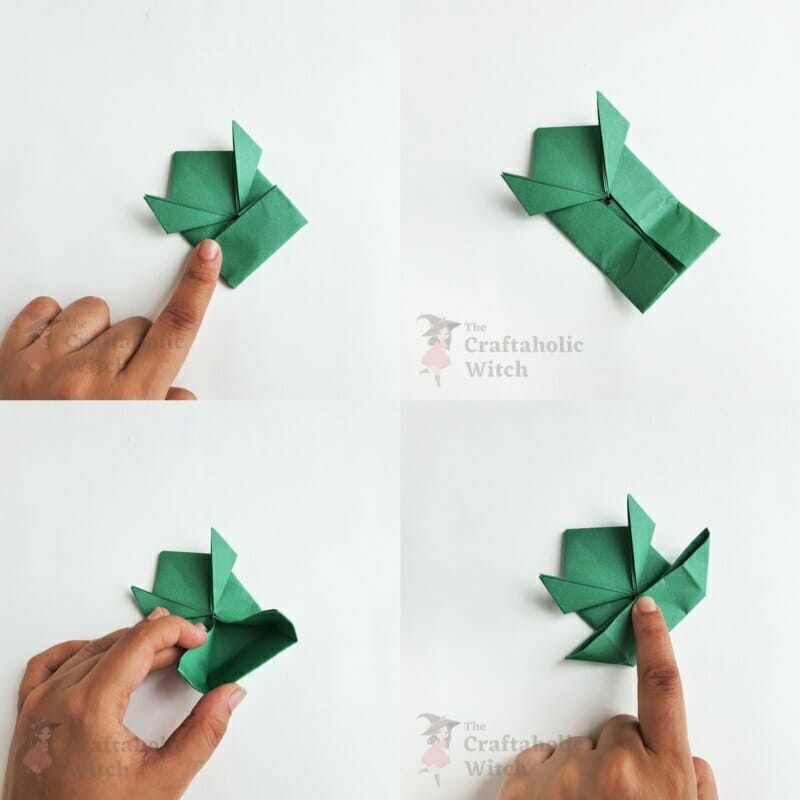 Fold the 2 bottom triangular parts to the opposite side by folding them to somewhat 45 degrees. Fold the pattern along the center hole.

Fold the top part in half and outwards. Now, turn the pattern to the other side. The frog paper pattern is complete. 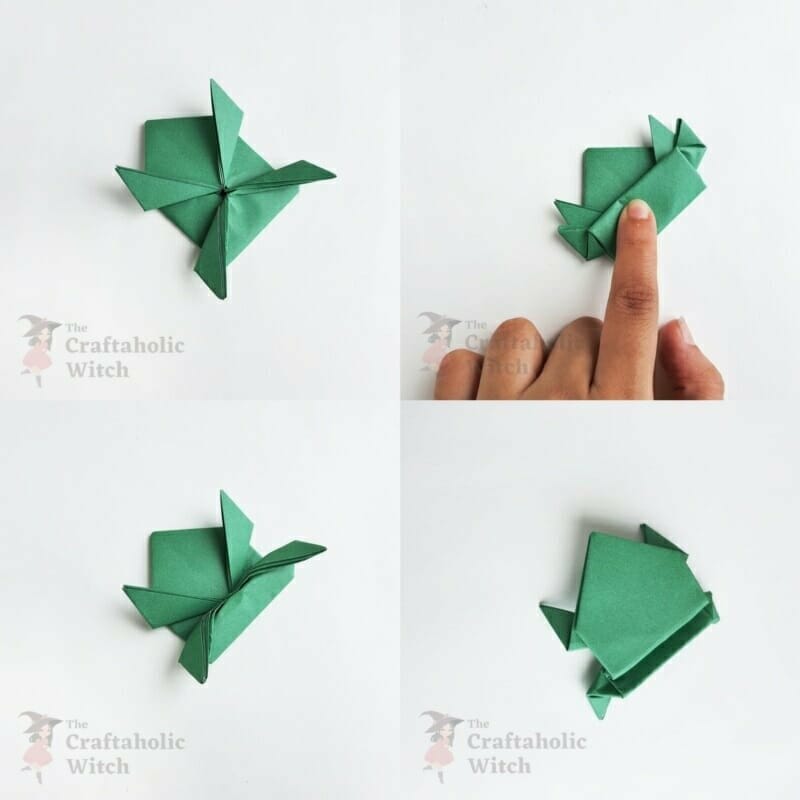 Use a sharpie or gel pen to draw eyes on the front top part of the paper frog. 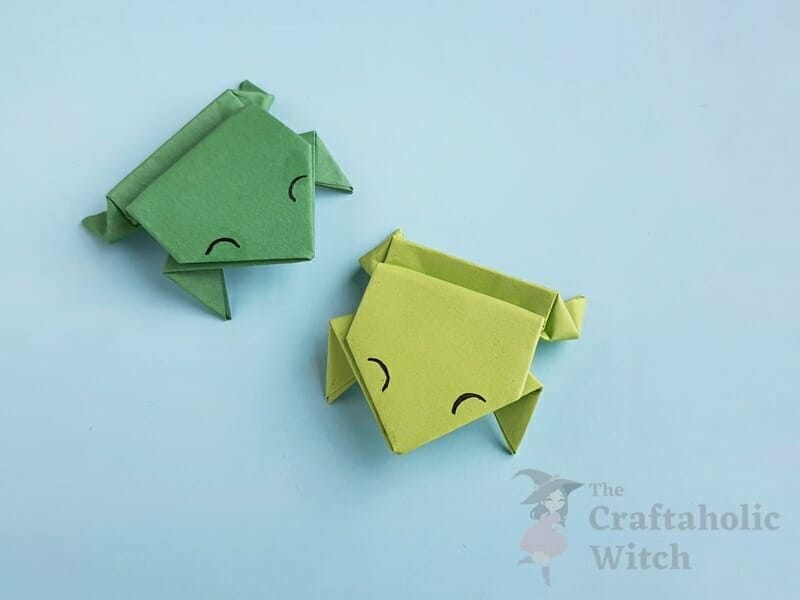 Here are some tips if you’re having difficulty crafting an origami jumping frog.

This origami pattern is quite easy and requires basic origami foldings. If you’re looking forward to involving and teaching kids origami projects that are fun and educational, then this paper frog craft is perfect! If you re-create this origami jumping frog, please do tag us on Facebook or Instagram (use #thecraftaholicwitch). 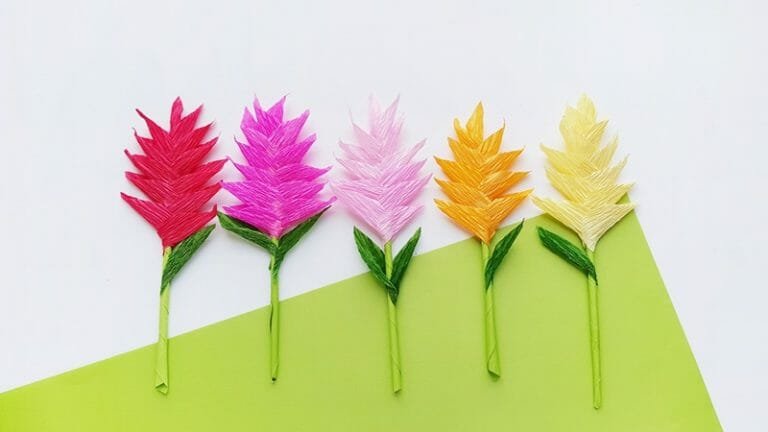 We often need some paper flowers with stems during the making of paper flower bouquets, but we can’t think of any. This time, we will make some tropical paper flowers (ginger flowers) with stems and are very easy to make. Let’s start.  DIY Crepe Paper Ginger Flowers with Stems I haven’t posted anything in a… 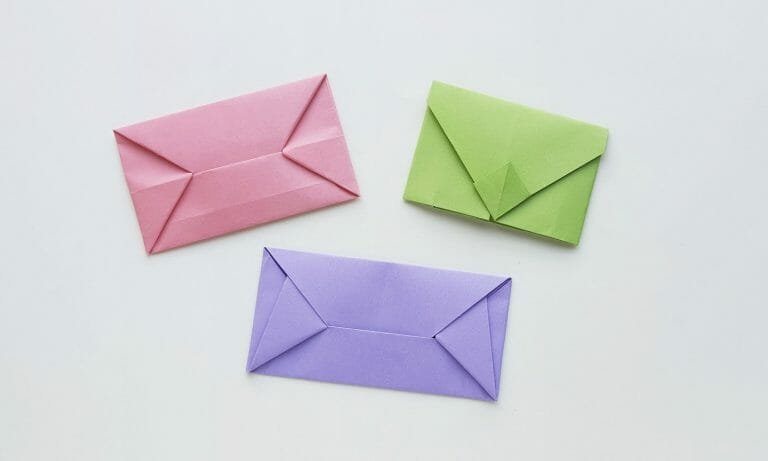 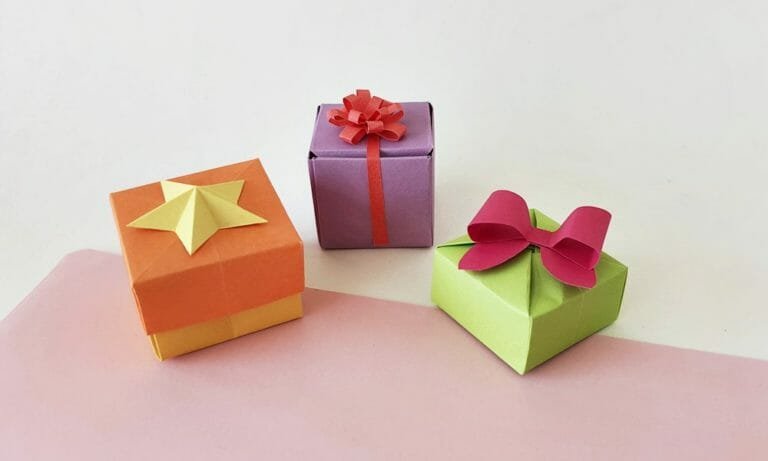 Ever want to make an origami box but don’t know how? This blog post has three ways of making origami boxes, with and without a lid, using just paper. There’s also a video tutorial! Whether it’s the Holiday season or not gift boxes are useful throughout the year. So, we thought of creating a paper… 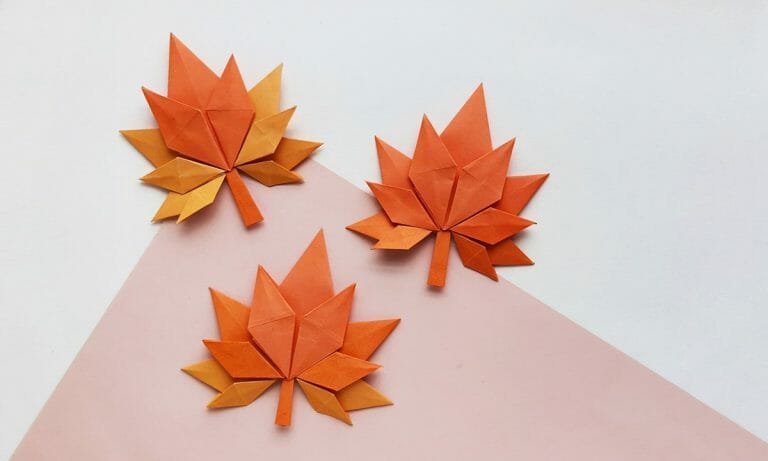 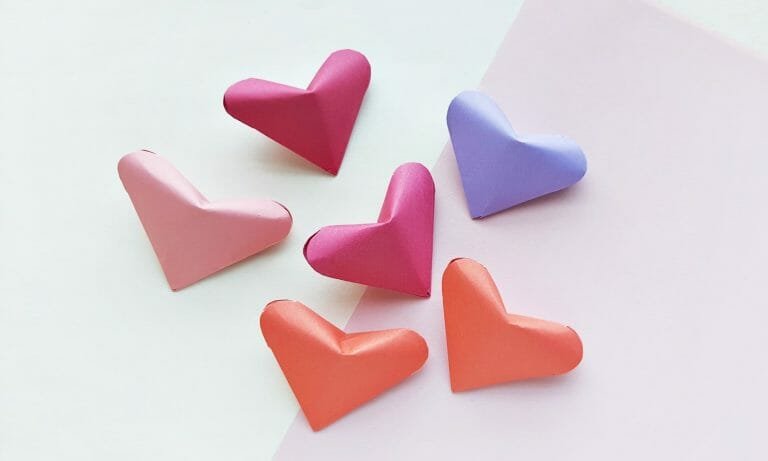 In this easy step-by-step tutorial (with Video), you will learn how to make 3d paper hearts. These super cute puffy hearts can be the perfect token of love for your dearest one. Enjoy! Who doesn’t like quick, fun, and easy craft projects during a weekend! We sure do, and we’re sure you’ll love today’s craft… 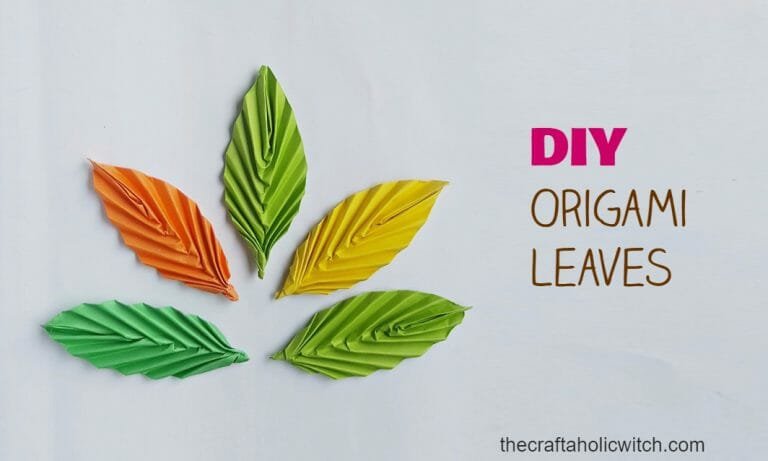 Folding an Origami Leaf can be a great start if you are jumping into the vast world of origami. On top of that, origami leaves have thousands of real-world uses. you can use them as decorations. Hang on the wall or use it as accessories of other origami crafts. Let’s jump on to our how to make an origami leaf tutorial and make some for yourself.