Learn to make two pretty little origami stars that can be perfect as cute decor, ornaments or quick gifts with a personal touch. The first is a 3d origami star, famously named origami lucky star, and the second is a 5 pointed origami star. I hope you will love making them. 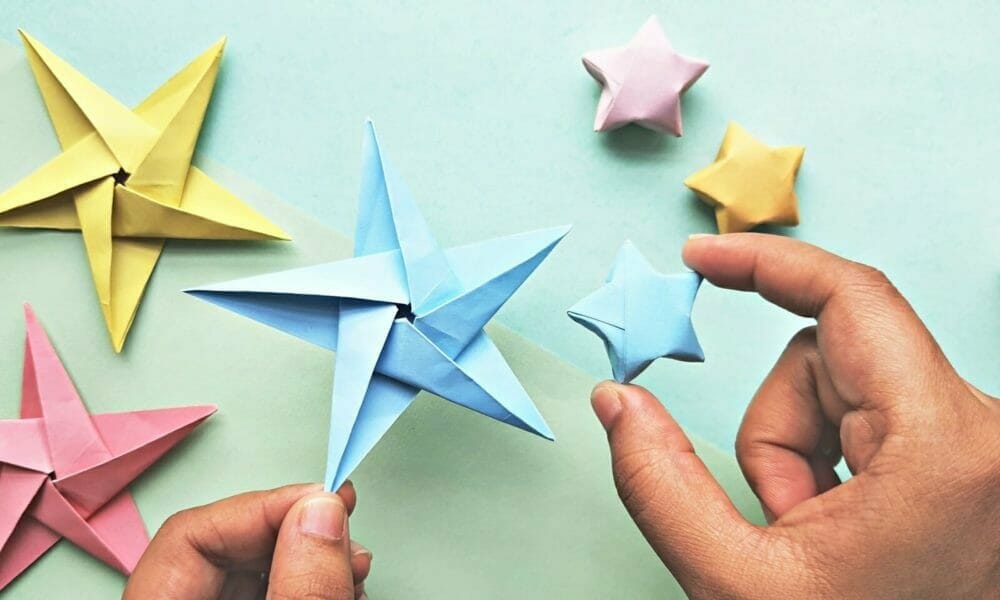 Hello Craftaholics! Did you miss us? We sure did, and to make it up to you guys, we tried to start this month with fun crafts; origami stars. In today’s tutorial, we’ll show you how to make 2 different patterns of origami stars, origami lucky stars and 5-pointed origami stars.

Origami lucky stars are also known as origami wishing stars. It is believed that folding the papers to make the origami puffy stars brings you luck! And bring even more luck when you give them away.

When you give someone lots of origami lucky stars, they get to make a wish(isn’t that wonderful?); besides, they look so pretty and puffy; you can also use them as decor by filling a jar or bowl, and you can put them into gift bags as a lucky symbol.

And about the 5-pointed origami stars, they look like famous Hollywood stars, right? So yeah, you can say they symbolize fame. This tutorial also teaches you how to make a pentagon shape from a square paper. You can use these 5 pointed origami stars to make Christmas star ornaments and decorations.

Both these origami stars are relatively easy to make. Even beginners can make them prtfectly after practicing a few times. So, what are you waiting for? Grab some colored paper and start making some origami stars. 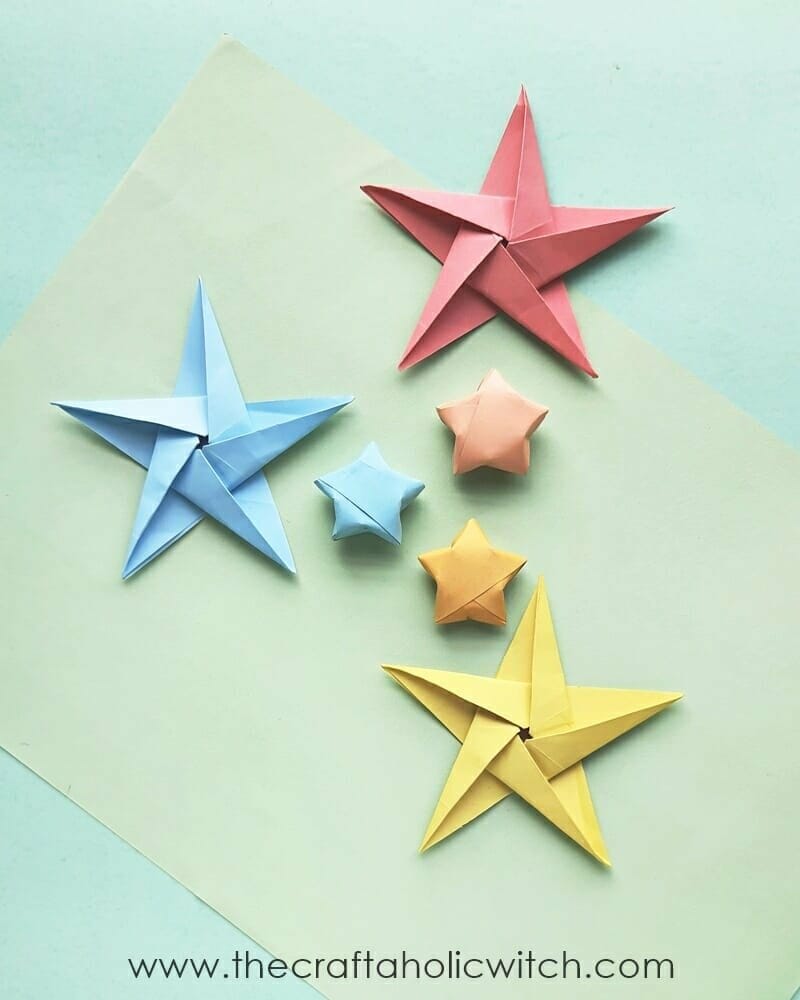 The cost of each of these origami stars is below $1 as they require a piece of paper only.

How to make Origami Lucky Star

Step 1: Prepare Strip and Create the Base Fold

Prepare a strip from a thin colored craft paper. We’re using a 2cm x 28 cm strip for the origami lucky star pattern. Hold the strip aside, keeping 3 or 4 cm extra on the side, and create a loop.

Now, insert the extra 3 or 4 cm through the loop and carefully try to close the loop.

Step 2: The 5 Point Star Pattern Base

Adjust the current paper pattern by matching all sides (of the loop, the inserted parts) and flatten them nicely.

Fold in the extra part of the short end and match it with the base pattern. Now, the paper pattern has only 1 open side, and we will continue to work with the open side now.

Step 3: Both Sides of the Current Star Pattern

This is the backside of the current pattern after folding the short end.

Hold the open side, fold and draw it towards the opposite side of the current pattern. You don’t need to worry about adjusting the strip while folding and drawing it, and it should automatically align with the base sides.

Step 4: Continue to Draw and Fold

Keep drawing and folding the strip around the base.

While drawing and folding, make sure to keep the strip aligned with the base.

When the strip reaches its end, keep 1 cm (at least) part for the end-tucking.

Tuck the extra part of the strip inside the previous layers and apply glue if you want. Apply glue will give the base an extra secured structure.

Hold the current pattern with both hands and press any 2 adjacent sides right in the middle.

Step 7: Pressing the Sides and Forming the Points

When pressing the middle of the sides, try to pressure the middle point only and keep the rest of the parts free from any kind of pressure.

One by one, press the middle point of each side.

After forming the 1st and 2nd points, you can form the rest of the points relatively easily. Use your fingertips to smoothen the points and the middle parts to give them a nice finishing. 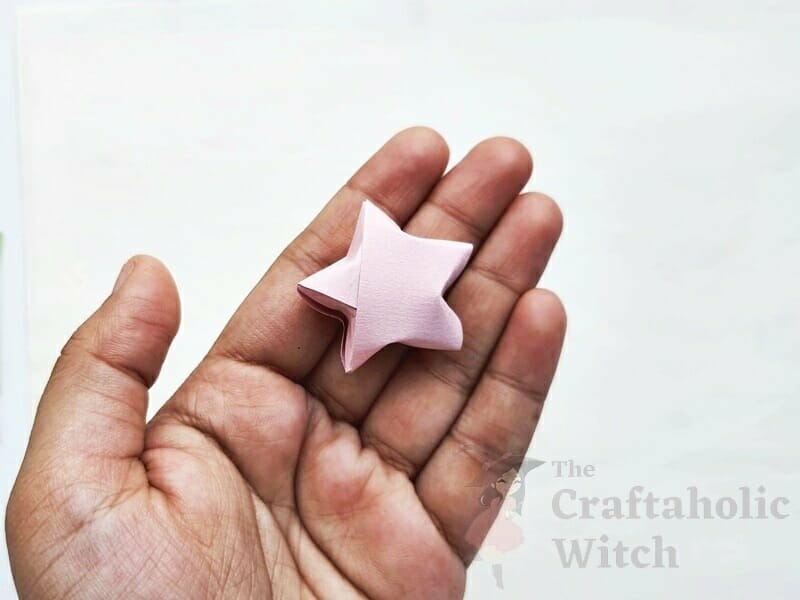 Making origami by reading written tutorials is often tricky. So, you have also made a video tutorial on how to make an origami lucky star. If you like the video, please don’t forget to subscribe to our youtube channel.

How to Make a 5 Pointed Origami Star

Step 1: Preparing the Paper and Base Folds

Prepare a piece of square paper from any colored craft paper of your choice. Create a half (horizontal) fold and a diagonal fold (from the left bottom to the top right corner) on the paper to create creases.

Now, fold the paper in half, keeping the right top corner on the front side. Now, join the left top corner with the bottom middle point of the current pattern. 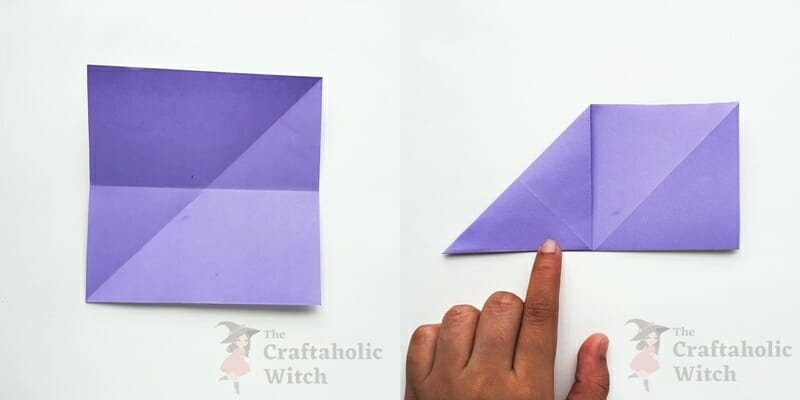 Now, join the bottom left corner with the top middle point of the current pattern. 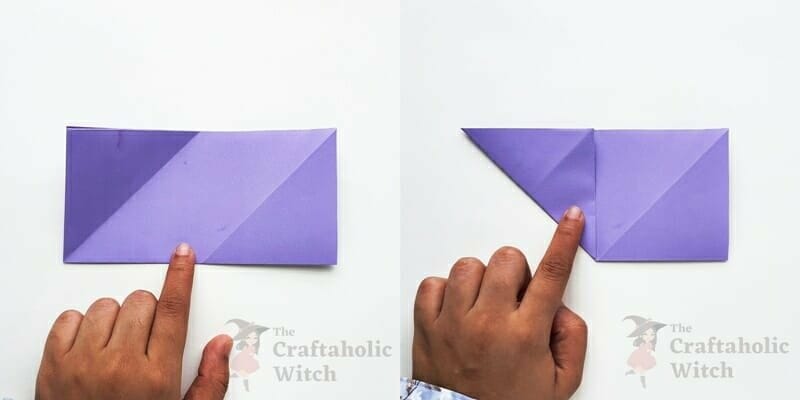 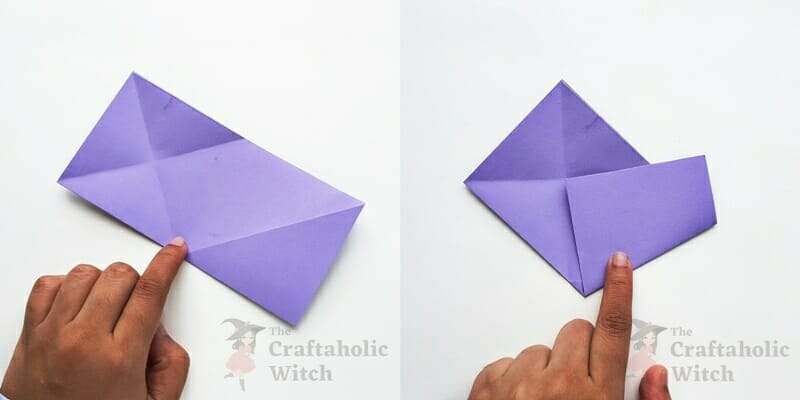 Keeping the last fold intact, Fold the top part in half by aligning the open side with the closed side.

Now, fold the bottom, closed side of the base pattern and align it with the edge of the last folded part. 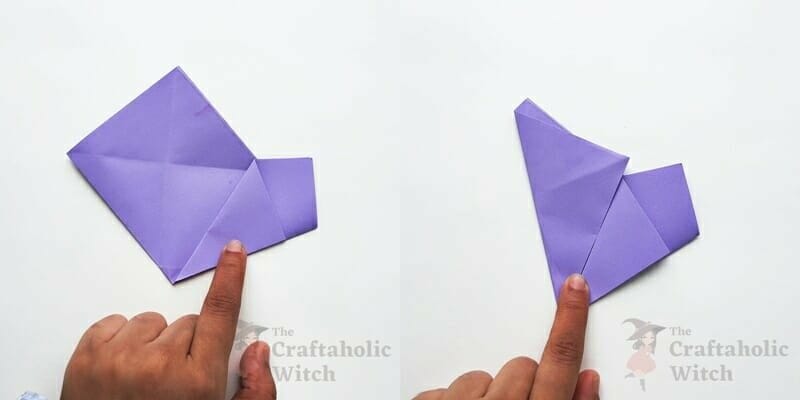 Flip the current pattern to the other side.

Now, fold the current pattern in half. 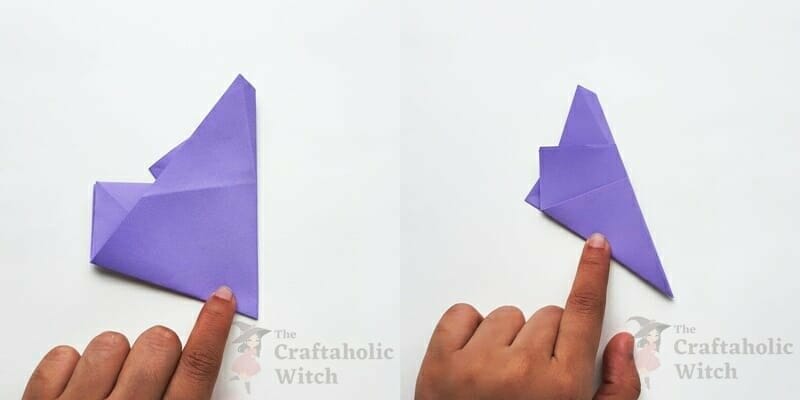 Use a pair of sharp scissors to cut the current paper along the edge of the shortest layer.

Unfold every single fold and the pentagon shape will be ready. 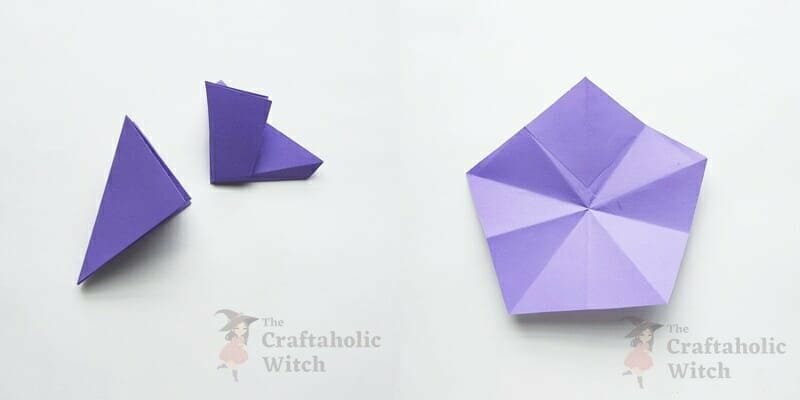 Step 7: Creating Base Creases for the 5 Point Star

Hold any one of the sides of the pentagon and fold it inwards by matching the corners of that side with the diagonal creases drawing from the 2 opposite sides. 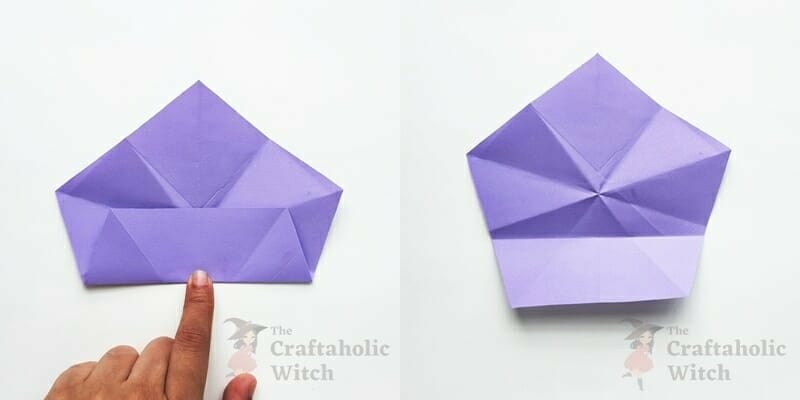 Step 8: Creating Base Creases for the 5 Point Star

One by one, fold and unfold the rest of the sides (4 more) to create crease lines.

Hold any one of the corners of the pentagon and fold it along the middle crease. 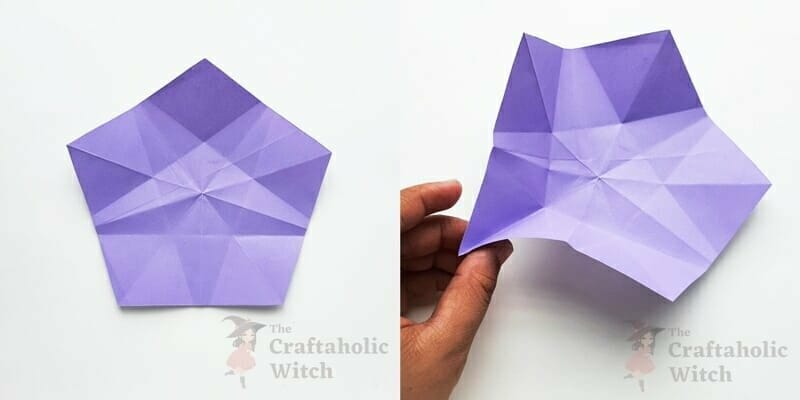 Step 9: Creating Base Creases for the 5 Point Star

The corner middle crease should intersect with the side creases.

Fold the side creases and flatten that part. 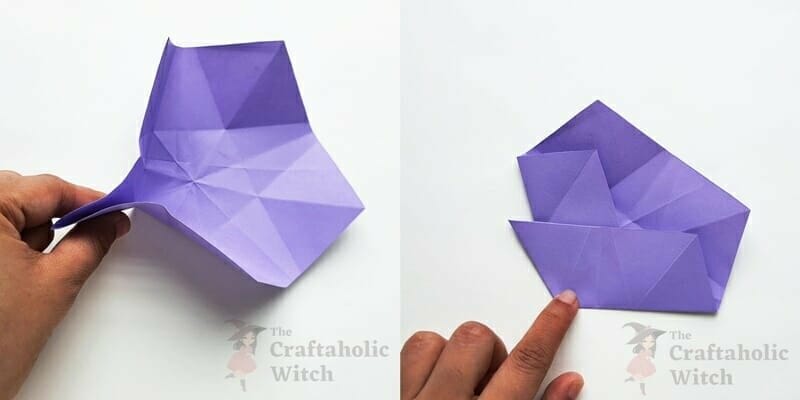 Step 10: Creating Base Creases for the 5 Point Star

One by one fold and unfold the corners similarly to create all the necessary creases to form the 5-point star.

The crease lines at this point might seem confusing, but these creases will help us create the origami star very easily. 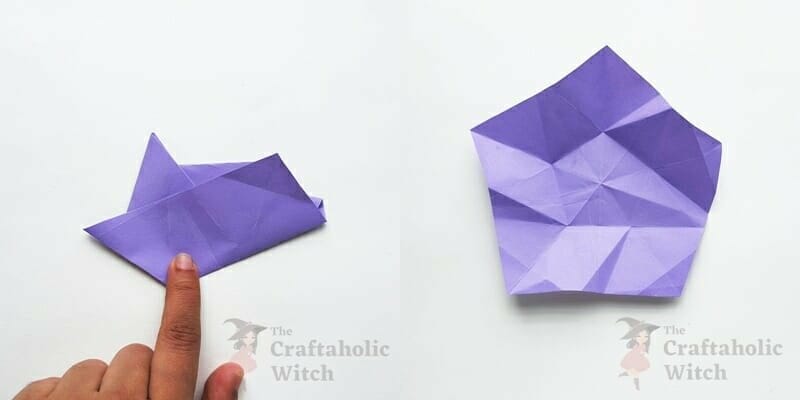 Step 11: Creating Base Folds for the 5 Point Star

Notice 2 adjacent crease lines drawing from the middle of each side.

Overlap the adjacent crease by folding them. 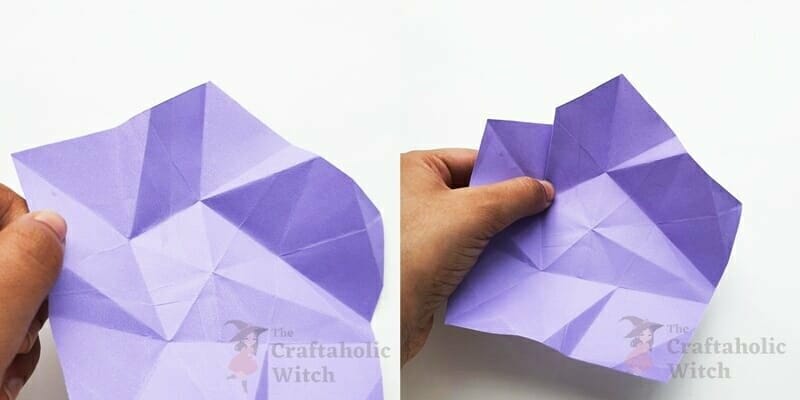 Step 12: Creating Base Folds for the 5 Point Star

One by one, fold all 5 pairs of creases on all 5 sides of the pentagon pattern.

Now, draw any one of the overlapped parts towards the center and flatten it with the center. 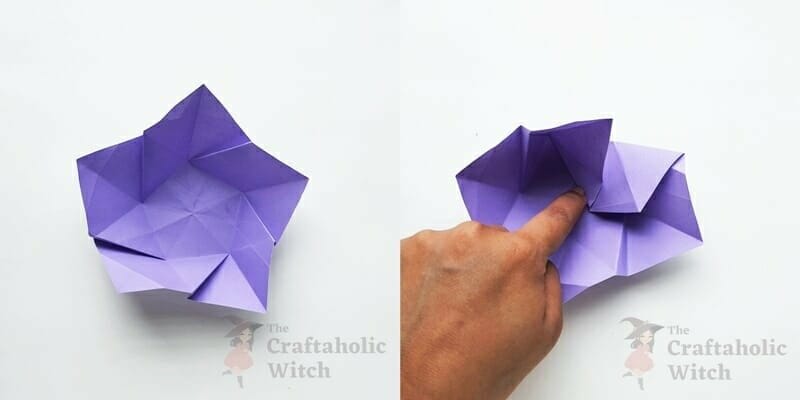 Step 7: Folding Sides Towards the Center

Similarly, draw the next overlapped parts towards the center and flatten them with the previous one. 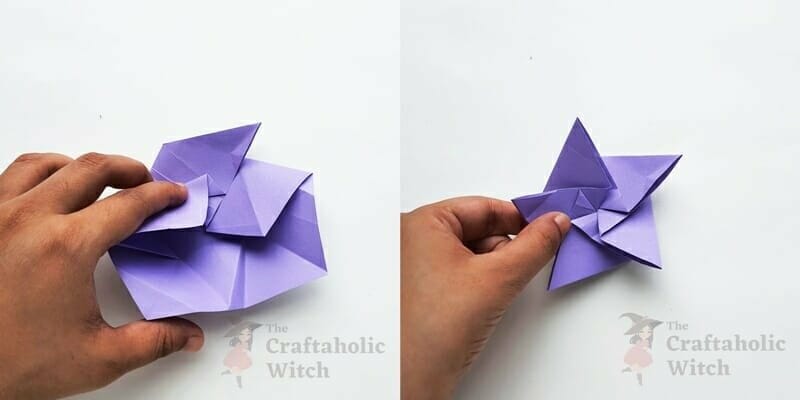 Flip the current pattern and let’s work on each point individually.

Fold the open side of any one of the points and align it with the opposite crease on the inner pentagon. 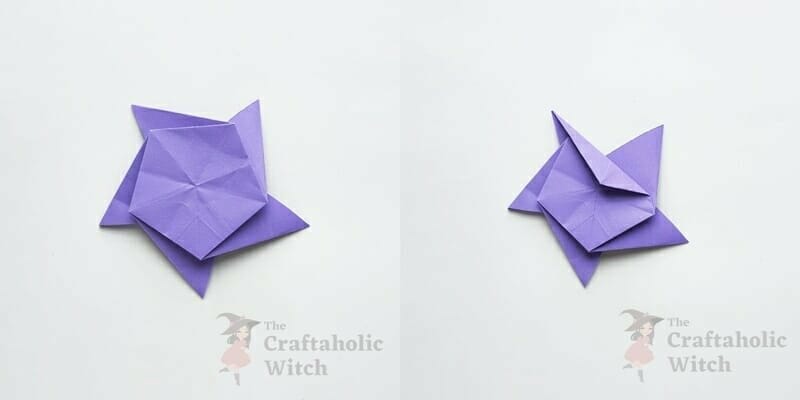 Move clockwise while folding the points.

Adjust the folded points and adjust the center part nicely. 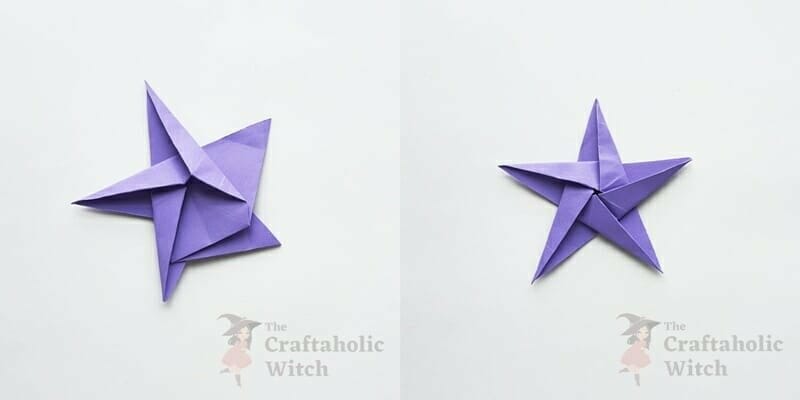 We made this video to assist you in making 5 pointed origami lucky star. Please don’t forget to subscribe to our YouTube Channel if you like this.

Here are some tips if you’re having difficulty crafting the origami stars.

These origami stars are perfect for any occasion. All you need is some time to spare and a piece of paper. If you re-create our origami stars, please do tag us on Facebook or Instagram (use #thecraftaholicwitch) and show us how you’re using or decorating the origami stars. 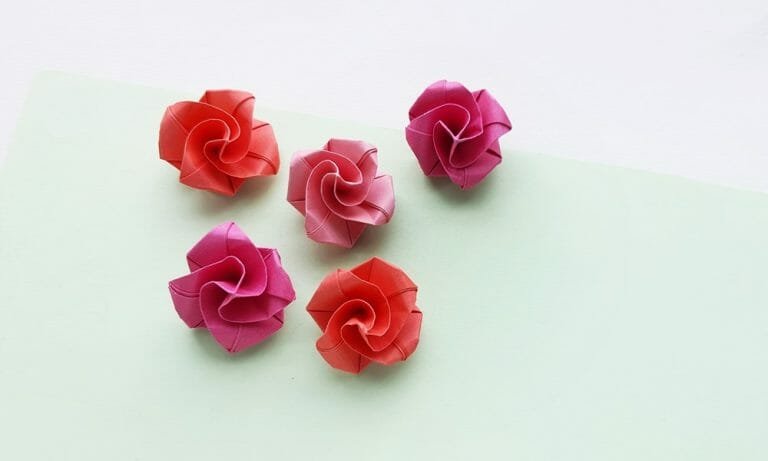 Want to make a pretty blooming origami rose out of a single sheet of paper? Learn how to make easy origami roses with our easy step-by-step tutorial. These easy-to-follow folding instructions are perfect for both beginners and kids. Have you noticed that we’ve posting lots of origami folding crafts lately? We absolutely love creating origami… 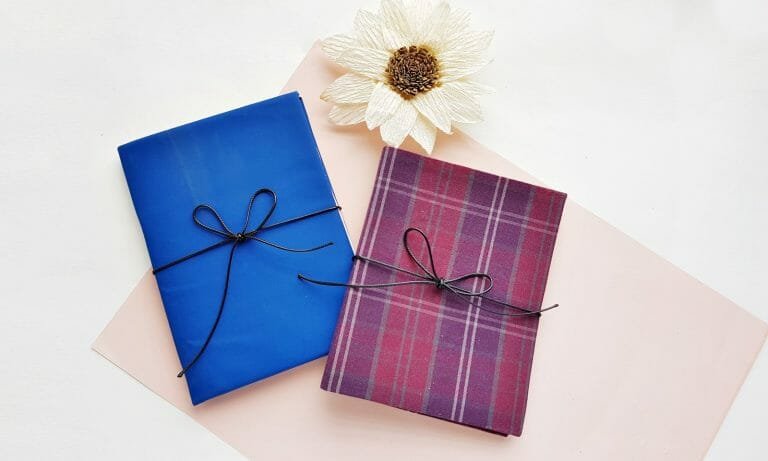 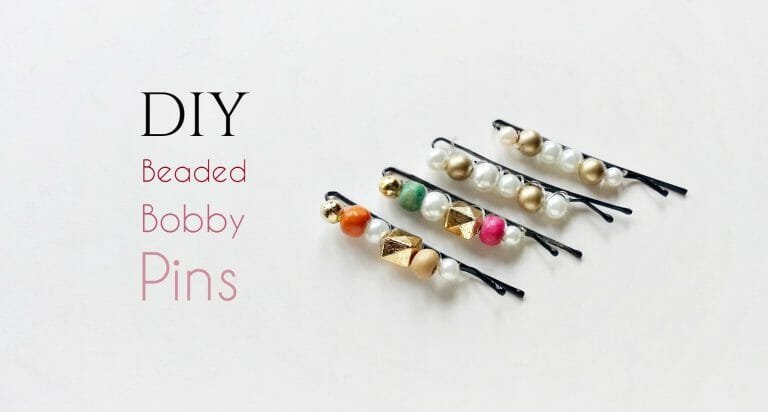 Create Beaded Bobby Pins   I always plan to do something amazing to my hair everyday and end up doing nothing. So I finally decided to make some simple yet pretty! hair accessories so that I don’t have to end up doing those boring buns or ponytails every single day. Ahh, I wish to become… 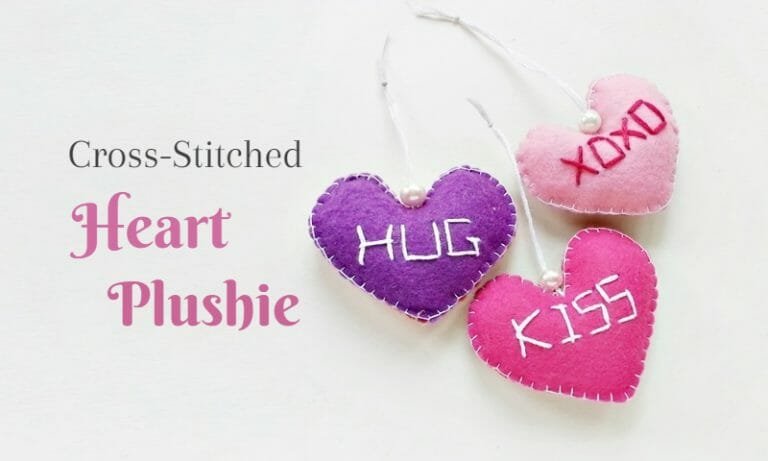 Cross Stitch a Valentine Heart Plush Valentines day is near and we’re all looking for unique gift ideas for our special ones. Well, here’s an inexpensive yet super cute gift idea. Who wouldn’t love a cute little handmade heart plush with sweet cross-stitched words! It’ll take only a few minutes, check out the tutorial and…

Don’t these button pendants look super cute? Want to know how I made’em? In this tutorial, I will show you how to make a button necklace pendant in few easy steps. Grab some old buttons from your grandma’s collection(or maybe you have a collection of your own!). DIY Button Necklace Pendant It won’t take much… 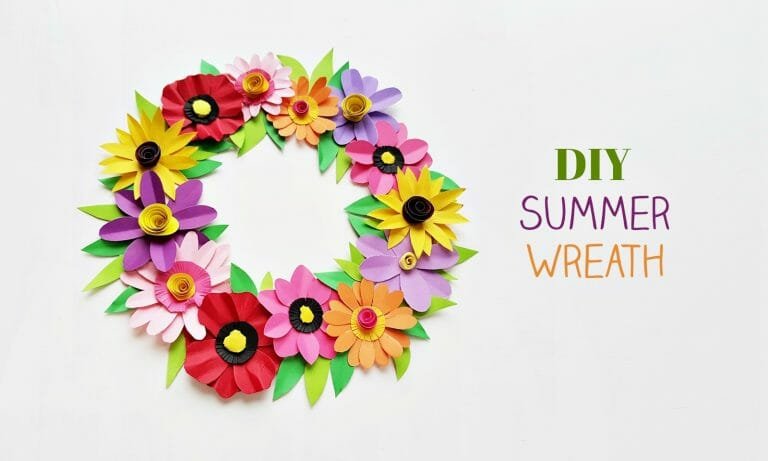